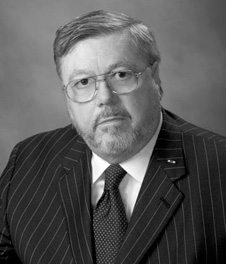 Noted local attorney Bob Puterbaugh will be honored by Florida Southern College for his distinguished service to the community with an honorary degree at the college’s winter commencement ceremony on December 16.

Mr. Puterbaugh, a longtime partner in the firm of Peterson & Myers, P.A., will be honored with the degree of doctor of humane letters during the commencement ceremony for undergraduate students at 10:30 a.m. in Branscomb Auditorium.

Mr. Puterbaugh has served for many years as FSC’s legal counsel and also on its Board of Trustees. He is well known for his pro bono work and as an expert in the field of healthcare law, serving as senior counsel to the board of directors of Lakeland Regional Health Center. He also has been a vigorous supporter of the arts in Lakeland, especially the Polk Museum of Art at Florida Southern College, where he is a past president.

“Mr. Puterbaugh has made an incredibly positive impact on Florida Southern College through his wise counsel throughout the institution,” said President Anne Kerr. “His wisdom, expertise, and sincere interest in superb education have resulted in many positive growth outcomes for Florida Southern. His professional success and important civic leadership are also major advantages for our entire community. We are privileged to recognize him at our commencement ceremony by awarding the well-deserved honorary doctorate.”

Due to the continued growth of its graduate program, FSC will for the first time hold a separate ceremony for its graduate students, which will take place at 2:30 p.m., also in Branscomb.

The guest speaker at both ceremonies will be architect Jeff Baker of the firm Mesick Cohen Wilson Baker of Albany, N.Y. Mr. Baker has been the architect for several projects involving the college’s collection of Frank Lloyd Wright structures, including the 2008 restoration of the Water Dome and the Theatre-in-the-Round. He also designed the college’s new admissions building, currently under construction along Lake Hollingsworth Drive.

During the morning ceremony, the college will confer the President’s Scholar medal upon one of its graduating seniors. The medal honors a graduate whose academic standing is in the top 1 percent, who exemplifies the values of the College, and who has a demonstrated commitment to scholarship, student leadership and service.

Founded in 1883, Florida Southern College is a private, comprehensive college and the oldest college in Florida. Florida Southern maintains its commitment to academic excellence through more than 50 undergraduate programs and distinctive graduate programs in business, accounting, education, and nursing. Florida Southern has a 13:1 student-to-faculty ratio; is an award-winning national leader in engaged learning; and boasts 30 NCAA Division II national championships. It is ranked among the Top 20 Best Universities in the South by U.S. News and World Report; named a 2016 Top ROI College by Forbes; and included in The Princeton Review’s 381 Best Colleges and The Fiske Guide to Colleges 2017. The College is committed to the development of the whole student through vibrant student life programs that prepare graduates to make a positive, consequential impact on society. FSC is conveniently located within an hour’s drive of both Orlando and Tampa and home to the world’s largest collection of Frank Lloyd Wright architecture, designated a National Historic Landmark in 2012. Named the “Most Beautiful Campus in the Nation” for two consecutive years by The Princeton Review and one of the nation’s “Ten College Campuses with the Best Architecture” by Architectural Digest, Florida Southern is an internationally-recognized place of beauty and academic excellence.

Peterson & Myers is pleased to announce that three attorneys have recently joined the firm.S. Matthew Keen received his B.S....

Florida Department of Transportation project to improve US 98 from North of West Socrum Loop to South of County Road 54: What to Expect and When to Expect It

The Florida Department of Transportation has plans to appraise property to be condemned for the 8.7 mile project to widen...

Continue Reading “Florida Department of Transportation project to improve US 98 from North of West Socrum Loop to South of County Road 54: What to Expect and When to Expect It”>

Five Peterson & Myers, P.A. lawyers were included in the 29th Edition of The Best Lawyers in America®. Each individual...